Mourning in the Presence of a Corpse 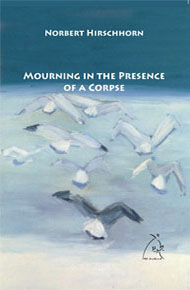 Mourning in the Presence of a Corpse

Going boldly where no Lebanese publisher has gone before

“Poetry doesn’t command much presence in publishing circles. The profile of English-language poetry in countries where English is not the first language — Beirut for instance — is particularly slight… So the recent decision of Beirut-based publishing house Dar al-Jadeed to break this linguistic boundary can be hailed as rather brave… Dar al-Jadeed… is renowned for its volumes by prolific regional writers, such as Palestinian poet Mahmoud Darwish… As a ‘gesture’ between East and West, Dar al-Jadeed’s choice of publication does fall very much in line with the prevailing theme of cultural dialogue in the region…

“Morbidity and carrion-related imagery are rife in this collection, whose title is taken from the presentation Mourning in the Presence of the Corpse that Lebanese artist and writer Walid Sadek gave at the 2007 Venice Biennale. Hirschhorn’s poem ‘Mnemosyne,’ also in this collection, is dedicated to Sadek… The motif of architecture features strongly, as an anthropomorphic notion of Lebanese identity, pockmarked by bullet holes yet still standing: ‘Memory like mourning in the presence of a corpse/ the corpse refusing burial/ buildings pocked by bullets and mortars/ refusing to collapse.’

“[Hirschhorn’s] style ranges from prosaic to the heavily abstract. The poems themselves deal with death, depression, ‘interior exile’ but also romantic affairs, the power of memories and resilience… His work covers a range of registers, from the colloquial to the richly poetic and elevated.”

“You know by now how much of my family’s heart is in the Middle East that turns up even in a poem about Johnson Vermont and more overtly in ‘Beirut Wires’ and ‘Lebanon’. I’m interested in how the poems move through other continents, too — in Asia and Europe. I’m moved by the range of moods: from the meditative calendar of months to the funny (to my ears) ‘Screaming my Heads Off’ to the heartbreaking (to my heart) ‘The Ballad of Beth El Cemetery’ (‘we have two little drawers in our church columbarium, next door to two little drawers of my parents-in-law, my own parents lying peacefully on a lovely hill in Arlington’s Military Cemetery,’ where we cannot go). And there’s the range of forms and of words rich with the unfamiliar and the colloquial and the formal. In short, Norbert Hirschhorn, these poems in Mourning in the Presence of a Corpse reward deeply wherever I am when I am reading them. ”

“Norbert Hirschhorn’s poems demonstrate his linguistic capacity and they demand as much from the reader… Even when dealing with historic events they offer a meditation on the individual.”*

“The American poet Norbert Hirschhorn writes the poetry of life”

“…The richness of his poetry derives not only from its deep and wide wisdom, but from its breath of humanity…. He writes about the human condition with sad and ironic humor. … The poetry possesses the capacity to widen the reader’s horizons and open to new venues of human interaction: Beirut, Bangladesh, Burma, Finland, New Jersey, London.”*

“Former U.S. president Bill Clinton hailed him as ‘an American health hero’ for his pioneering medical work in war-torn countries around the globe, but in his autumn years Norbert Hirschhorn is garnering praise for something completely different — poetry.
“The retired physician, who revolutionised rehydration treatment across the developing world and now lives in West Hampstead with his architect wife, has just released his sophomore collection, entitled Mourning in the Presence of a Corpse. Hirschhorn, 70, is the first non-Arabic writer to be published by the influential Dar al-Jadeed imprint in Beirut, where he lives half of the year. ‘The collection was very much influenced by Lebanon. It’s a dangerously endearing country. It’s the perfect country for a poet,’ he says. ‘The book has been very well reviewed in the Arab press. When they praise an American of all things, this to me is the highest praise.’ Some would say the book is dark and despairing — I would say it is optimistic and unblinking. Despite rave reviews, he remains modest: ‘I love the craft and I keep studying it and trying to get better at it.’”

“Mourning in the Presence of a Corpse is a superb volume of poems, the best I’ve seen lately. So many marvelous things… tasteful, meticulous and literate to a great degree.”

essayist, novelist; author of The Doctor Stories, The Whistler’s Room, and others

*Translated from the Arabic by Rasha al-Ameer and Cynthia Myntti.